Five million miles is a little mind-boggling to conceptualize. That will get you around the world no less than 200 times. Yes, 200 times around the Earth.

Five million miles is a little mind-boggling to conceptualize. That will get you around the world no less than 200 times. Yes, 200 times around the Earth. 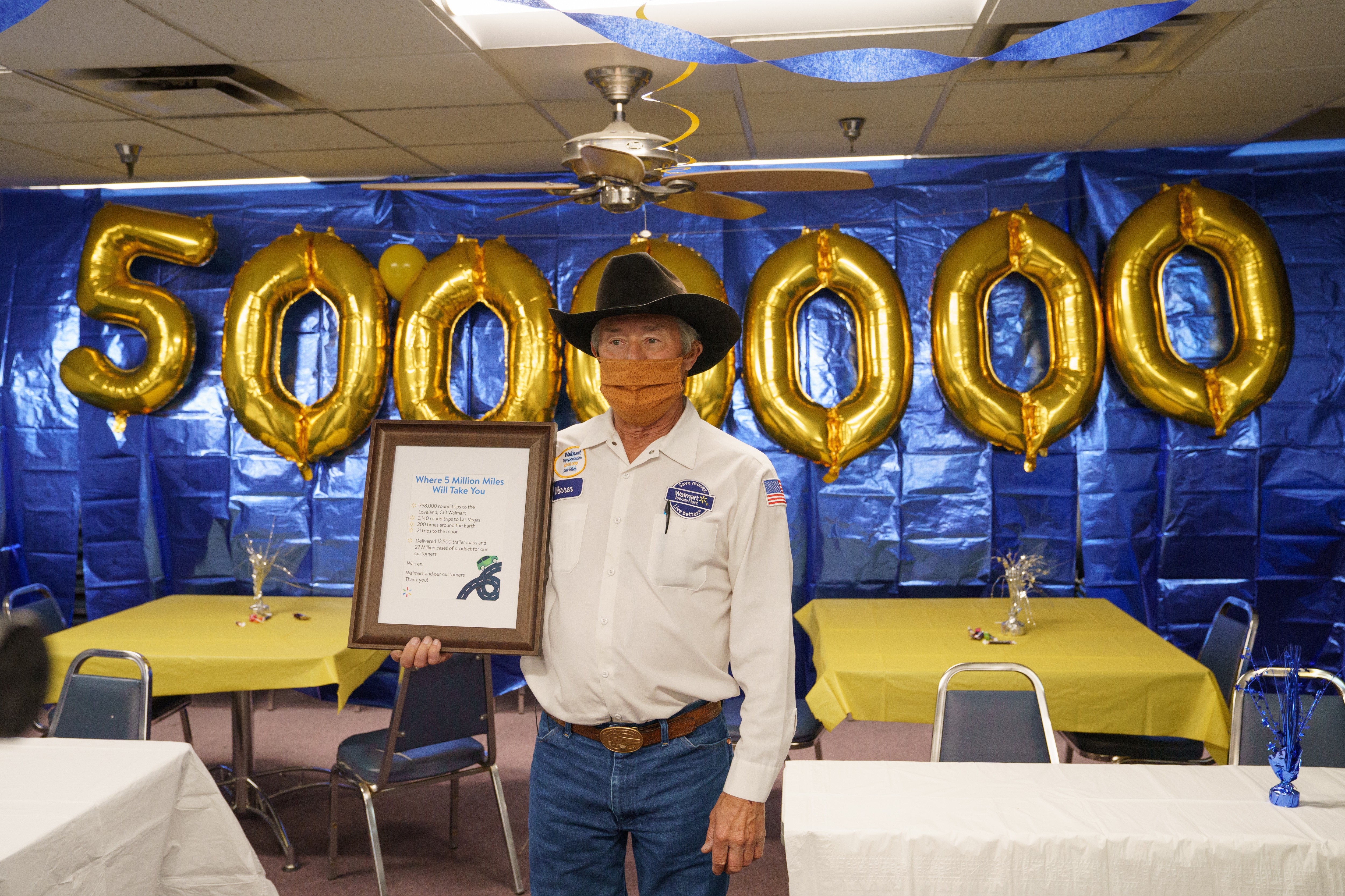 So, to set the goal of driving five million miles safely in a big rig takes a lot of confidence. But that’s just what Walmart Private Fleet Driver Warren Greeno set out to do years ago. And on Wednesday, Oct. 21, 2020, he achieved his “mile”stone and passed five million safe miles behind the wheel of a Walmart truck. “It means a lot to me,” Greeno said.

And while the distance driven is an amazing feat, the fact that all those miles have been travelled without an accident may be even more impressive. Greeno is quick to explain that safety goes beyond individual actions. It’s about influencing others as well. “Safety means to me, going to bed at night knowing that I’ve done the right thing,” he said. “And I may have saved somebody’s life that day or influenced someone into doing the right thing.”

Doing the right thing has put Greeno in plenty of situations to be a positive influence, including one snowy night when stopping his tractor-trailer in the middle of the road turned out to be a life-saver. He was driving through a snowstorm, and he couldn’t see the road. Warren had to make a decision. “Never before (or since) had I come to a complete stop in the middle of the interstate, because I couldn’t see,” he remembered.

Shortly thereafter, he heard a woman knocking on the door to his cab. The driver of the car had slid off into the ditch and was about to freeze to death when Greeno stopped his rig right in front of them. “I was put there for a reason,” he said.

Greeno has been the gold standard amongst his fellow drivers for a long time, but his safe driving milestone will be an inspiration for years to come. Justin Butcher, General Transportation Manager at Walmart DC 6819 in Loveland, Colorado, admits to knowing Warren only a short time, but he recognizes that Greeno’s achievements have shown everyone in the distribution center that even the most ambitious goals are within reach.

“He’s shown it at each one of those – three million, four million and now five million milestones – that doing it safely is very achievable. That helps us all learn that you can get there,” Butcher said.

Warren Greeno Family
There are a lot of perks to travelling the open road. Some of Greeno’s favorite places to drive are the Big Sky country in Montana and Texas. He laments that he only has about five New England states he hasn’t driven through in a Walmart truck. Even though the scenery is great, he is quick to point out that Walmart drivers enjoy other perks that have helped him go the distance.

“Things are possible that you could only dream of elsewhere: special trucks, special recognition, family-knit ties and respect. Above all, respect,” he said.

After five million safe miles, many might think that Greeno would be ready to drive off into the sunset, but he reckons he has a few more miles left in him. He wants to work another 14 to 15 months, which he figures will equivalate to about 170,000 more miles.

And when Warren Greeno is done driving, he’ll leave behind a legacy of safety that other drivers are sure to strive for.